What Is The Difference Between MLA And APA Citation Style

APA (American Psychological Association) and MLA (Modern Language Association)  citation  are the two critical writing style that are used in academic papers, report writing, dissertation and essay assignments in various colleges and universities around the world.

You need to follow one of the two different modern styles, i.e., APA citation style or MLA citation style to format your academic paper while writing a dissertation or a thesis, as instructed by your university professor. Although both forms of writing appear to be similar, they do have an elusive difference that you will need to follow. 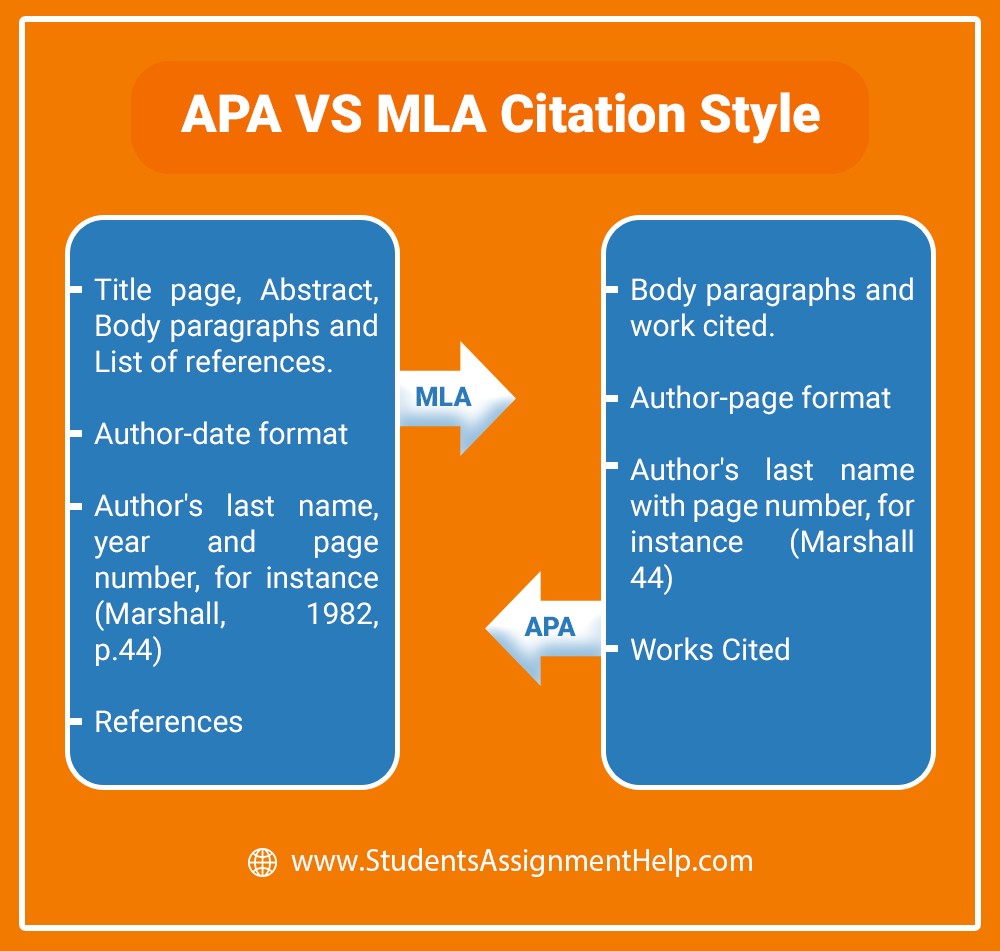 There are several styles of writing that are followed across the world. However, most of the analyst supports mainly these two different writing formats. APA styles of writing are predominantly used in social sciences, while MLA writing style is used in liberal arts and humanities.

For a successful academic paper, it requires you to perform proper research, craft an argument, and cite appropriate references to support your statement. Based on the matter of the subject the scholastic document you are writing, you need to select the style to follow. To meet the citation requirement for the subject matter, each method treats the formatting of the document a little differently.

The history behind MLA and APA citation styles gives the difference behind them. Modern Language Association referring to MLA had published a style guide for reference style of literary research and scientific works in the field of humanities. When it is about references and citations, then MLA gets more detailed.

Moreover, MLA can get better used at present tense of verbs. Mainly, MLA focuses on the names of authors and is known to consider ancient sources along with the new studies.  On the contrary, APA focuses on the year of the referenced book or the most unique and relevant publications.

American Psychology Association that created rules for publications of journal articles and books from which APA style had originated. In 1929, it was first published that helped the authors for structure their works plus helped in creating a unique and original style of references and citations.

APA provides the most comprehensive text to the reader, along with the proper headlines and avoids plagiarism. For scientific papers, lab reports, and documents, APA gets the reference. When it comes about academic works, the style can also dictate language use standards. The guidelines are mostly preferred to get updated to remove the sexist, racist, or intolerant language. One can use free APA citation generator to save some time.

The two citation styles are different in terms of in-text citations and the format of bibliography citations. Here is the list of differences between MLA and APA citation styles.

Determining the Suitable Citation Style for your writings!

For most of the time, your university professor will choose the referencing style that you need to use in your document; however if you have a choice you can select any of the forms by following these suggestions.

Which is Better among APA and  MLA Citation Style for Writings?

Many wonders that which of the formatting style is better for using. However, it also depends on using format. MLA is more appropriate for working with fictional literature, mainly published in large volume along with the text-citations referring to the information on the specific page.

By contrast, APA gets used while working with short publications like academic articles, often without page numbering. In text-citations more appropriate by APA style because it involves the year mentioned which help in better research about the topic.

StudentsAssignmentHelp.com can assist the students in Choosing the Best Citation Style

Choosing the best citation style and write the entire academic document according to it is a tiresome task for the majority of the learners and they find ways to escape out from this arduous task but unfortunately cannot find out anyway.

No student can flee away from this task, as these tasks hold the majority of their academic grades on which their future depends. StudentsAssignmentHelp.com can assist the students in choosing the right and best citation style as their online homework help.

It is not quite challenging to work with MLA and APA formatting style, especially when one has to work on a particular subject. However, the details required to follow makes the use of citation styles complicated. By using the proper guidelines for the formatting styles, one can perform excellently with their academic paper.