Types of Reliability & its Use in Research Methodology with Examples

Reliability is basically an extent up to which the various techniques which researcher applies at the time of research produce similar outcomes. Some common types of reliability are Parallel form, interrater, test-retest, and internal consistency.

Table of Contents hide
1 Different Types of Reliability in Research
1.1 A) Inter-rater reliability
1.2 B) A parallel form of reliability
1.3 C) Internal consistency

Different Types of Reliability in Research

here we are going to explain all different reliability types below.

It is basically a degree up to which measures are consistent in itself.

it is basically the extent up to which there is a difference in the test scores.

You can utilize it for measuring the stability in outcomes in the case when you perform a similar test on the same sample but at different times. 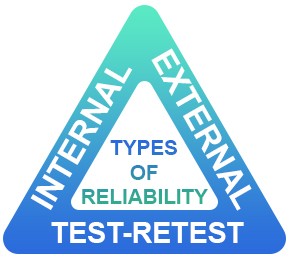 It is also known as interobserver reliability. Researchers mainly utilize it for measuring the extent up to which there is mutual consent between people serving similar things.

The Research team in a hospital analysis wound healing inpatient.  Researchers uses  a rating scale for measuring the different phases of the healing wound. In addition to this, the research team has also establishes a specific standard or criterion for analyzing the different aspects of wounds. After completion of the assessment of the wound by all members of the research team, compare results. The research findings of the comparison indicate the correlation among different sets of outcomes which means the test which you have perform has high inter-rater reliability.

B)  A parallel form of reliability

It assists in measuring the correlation between two equal versions of the test. Researcher mainly uses it when they have various assessment tools for measuring the same thing.

Researcher has design Questionnaire for measuring financial risk faced by the organization, all the questions in the questionnaire are categorized into two segments and participants are also categorized. The teams have been asked to perform tests then the comparison between two different tests performed by both teams A and B  has been done and findings reveal the same results which indicate a high parallel form of reliability.

It helps in the assessment of the correlation between the numbers of items in a test. There are no requirements for making repetition in a test for measuring the internal consistency. It is always advisable to have a single data set as it will provide you ease in measuring the reliability.

An example of internal consistency:-

Researcher design set of statements for analyzing both the pessimistic and optimistic mindset of a group of people. The researcher ask all the participants to rate their agreement about the statement on the rating scale consisting of rating one to five. If in case the test is highly internal consistent then in such case respondents having an optimistic mindset will have high ratings and optimistic would have a low rating.