The Poetry analysis is done to analyze the purpose of the poet behind a given poem by finding out its central theme and ideas. Analyzing a piece of the poem includes elements like the setting of the poem, its theme, the main examples given in the poem and literary devices. There are different types of poems which are analyzed with a unique approach based on the period to which the poem belongs. For example, the importance of rhyme scheme and couplets can be seen in the classical age. 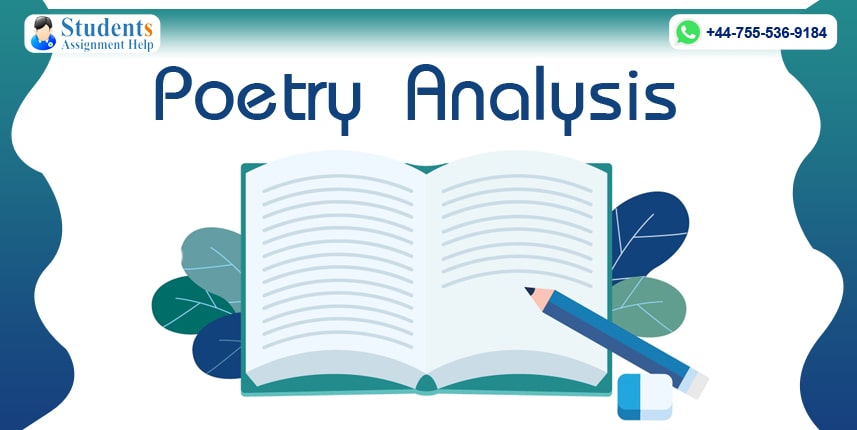 At the same time, we can see the effect of nature on poetry in the romantic period. Few examples of poetry analysis are given here that will help you to understand the way by which a poem can be analyzed on literary grounds by criticizing it on both positive and negative note.

What is a poetry analysis?

As the name indicates poetry analysis symbolize the subjection of a piece of poetry for critical analysis. The themes, central idea, literary devices and examples of the poem are subjected for analysis to come up with the motif of the poem for writing the given poem. At the same time, a poem is also analyzed on the basis of contemporary social, political and economic situations of the society.

A good poetry analysis always includes the setting of the poem, its major themes, and literary devices that are used in it like alliteration, metaphor, and simile and so on. Poetry analysis of a poem helps or guide a person about a poem and its important points before he proceeds further for reading a poem.

Poetry Analysis example for the poem The Sun Rising

The sun rising by John Donne at a glance

The Sun rising is a poem written by the metaphysical poet John Donne in which he talks about the unruly sun who is making him up in the morning when he does not want to. The poem addresses the sun like a fool and asks not to disturb him by waking up in the morning by peeping through the curtains.

He directs the Sun to wake up apprentices and those who are courts men. He also derogates the sun and its powerful beam that bright rays of the sun are not so strong to make him left his bed as he can ignore them just with a wink of an eye.

Critical analysis of the poem

The poem is devoted to the age of renaissance which started with the discovery of the printing press and new inventions of science as well. We can also say that people of the age were not ready to leave their traditional approach towards the sun and were not accepting it with the spectacles of science.

Impact of colonialization and its beginning can be seen through this particular reference of species from the Indian region in the poem. The poem is written in the age of renaissance and we can see the objection of the people along with acceptance about the new knowledge in the poem through the poet.

The poem is showing us the period of renaissance that started with the age of knowledge and science. With the coming of the printing press and sea routes, people were traveling from one place to another. As a result of which culture, trade, and the economy were also flouring throughout the world.

Also, the origin of science was coming up with new discoveries and inventions which were either accepted by the people or they were raising voice against it. Some of them were not happy with the change and others were objecting science even. At the same time, the inclination of the people of the age can be seen towards the Metaphysics as well.

The Vanity of human wishes is a poem that is written by Samuel Johnson and mocks the painful wishes of a human being. The Johnson talks about the different wishes that are made by a human being like Wealth, territorial power, beauty, brain and so on and how they are not long-lasting. Poet gives several examples to prove the vanity behind every human wish that is made strongly by humans. For example he talks about the wealth which is desired by many but it is always associated with the risk of life.

People having wealth can never remain happy as they are always in fear of getting looted by someone. Similarly, he talks about the vanity of beauty desire as beauty is never permanent and it perishes with the time. Further, he mocks at the brain as Milton was the most intelligent person what at the end of his life he had to encounter mental illness.

The Johnson also gives the example of Alexander the Great who conquered the world but at the end of his life, he was suffering from a serious ailment. That is how he depicts the vanity of all human wishes that are desired strongly.

Analysis of the Poem

The conclusion of the poem can be seen with respect to the development of the human brain with the coming of science. Also, the use of classical language along with the Victorian touch can be seen in the poem.

The overall purpose of the poem is to reflect how people were not ready to accept the things as it is and they were trying to know the reason behind their existence.  All this can be seen with a co-relation to the science and technology along with its flourishing.

Free sample of poetry analysis for the rime of ancient mariner

The Rime of the ancient mariner is a poem written by the Samuel tailor Coleridge which is written in the romantic age of English literature.   The poem talks about the hurdles that were faced by a mariner when he made an alligator dead while sailing through a journey. The mariner went through a lot of problems throughout the journey and meets so many creatures that look ugly in the journey.

Also, he finds troubles to manage food and water while sailing through a river after slaying that alligator. The overall purpose of the poem is to give importance to the small creatures and nature in the poem. When the mariner accepts the creatures as part of life all his troubles get vanished within moments.

Critical analysis of the Rime of Ancient Mariner

The poetry shows how the people were disgusted with the rules of the classical age in English literature and that is why they are heading towards the nature or age of romanticism. A complete analysis of the poem shows that no aspect of the poem is based on the classical age where only formal tone can be accepted in the poetry with complex words as it was meant for the people of the upper cast.

The conclusion of the poem can be given in such a way that it is romantic age poetry. The poet is trying to reflect the impact of killing and going against nature on human life through this poem. After the poem rime of ancient mariner, the life of alligators gets good in the world as people used to consider it as sin for killing an alligator and other natural creatures.

This is the biggest benefit that can be seen through the poem the Rime of the ancient mariner. At the same time, people start coming out of the manacles of rules and regulations of classical age after reading this poem of S. T. Coleridge.

The poetry analysis help is offered at a very low price to the students of college and school along with on-time delivery. So if you want to seek help in analyzing a poem given in college assignments then take the assistance of Students Assignment Help experts anytime. Even emergency assignments help in poetry analysis is also available for the students from the website of Students Assignment Help.