Looking for Plagiarism free Answers for your US, UK, Singapore college/ university Assignments.

Management provided Julie with weekly customer service department costs and requests data for the past year. Julie analyzed the data and has produced a chart to help management understand the data, together with regression analysis output and descriptive statistics. This information is shown below, in addition to the data used by Julie in her analyses. Notice that there are no service requests in week 17 as there was a shutdown for audit purposes. 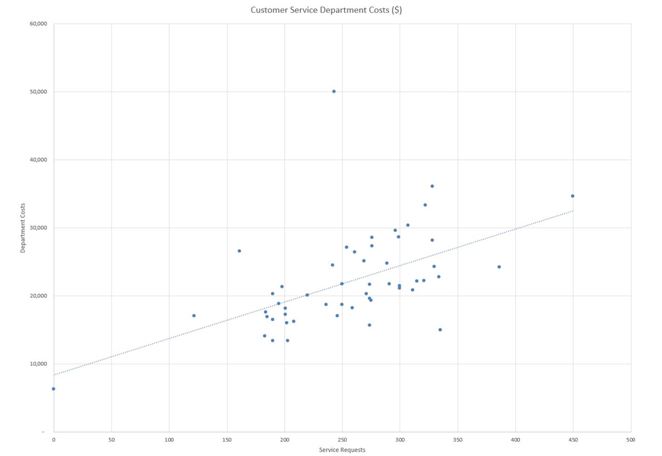 Part 2: In a time before Netflix, Prime, Crave, etc.

In the 1990s movies were distributed one-way only: through theatres. The accounting would certainly be simpler with one outlet than it is today! So for this case, let’s imagine we are studying one particular Oscar-winning film, “the Movie”, that was projected to generate cash flow of as much as $350 million for Viacom, Inc., Paramount Pictures’ parent company. Such success would insure the film a place among the top-grossing films of all time! Times have most certainly changed!

But would the Movie be a moneymaker for Paramount? Films were typically distributed to theaters under an agreement that splits the gross box office receipts approximately 50/50 between the theater and the movie studio. Under such an agreement, Paramount had received $191 million in gross box office receipts from theaters as of December 31, 1994. Paramount reports that the film cost $112 million to produce, including approximately $15.3 million each paid to the main star and the director, and that ‘production overhead’ of $14.6 million. This production overhead is charged to the movie at a rate equal to 15% of other production costs.

Not included in the $112 million production costs were the following other expenses associated with the film. Promotion expenses incurred to advertise, premiere, screen, transport, and store the film totaled $67 million at the end of 1994. An additional $6.7 million ‘advertising overhead charge’ (equal to 10% of the $67 million promotion expenses) was charged to the film by Paramount. These charges represent the film’s allocation of the studio’s cost of maintaining an in-house advertising department. Paramount also charged the film a ‘distribution fee’ of 32% of its share of gross box office receipts. This fee is the film’s allocation of the costs incurred by Paramount to maintaining its studio-wide distribution services. Finally, $6 million in interest on the $112 million in production costs were charged to the film by Paramount.

Get Help By Expert

Looking for Plagiarism free Answers for your US, UK, Singapore college/ university Assignments.

Get 30% off on this Assignment