As per the marketing case study of Red Bull, the company has been enjoying great success with the help of the selling non-alcoholic carbonated energy drinks. For the establishment of the worldwide forerunner of the energy drink category, the company has made great sales of about $4.7 billion on annual basis. The company, since its introduction in the United States during 1997 has been retaining the leading position in the carbonated soft drink industry (The Red Bull cans, 2014).

The company has been holding a good market share at the present date.
With the passage of time, several companies have been entered into the market of soft drinks which are sharing the lucrative market of Red Bull. The dominant market position hold by Red Bull has been challenged by some of the well-established business organizations. For instance; Hensen’s Natural Company the produced Monster Energy Drink and Rockstar Incorporation with produces beverages with the same name, has been offering the beverages of the same category at the same prices.

In addition to this, the other soft drink companies including Coca-Cola and PepsiCo have also been posing a significant degree of competition to Red Bull through increasing some share in the energy drink sphere.
In order to have a significant market position and maintaining its market share the company has been producing its energy drink products with high quality and meeting all the standards of sustainability.
The company has been making significant efforts to have minimization of its business impact on the immediate environment because, for the production and distribution of energy drink products, the company has been using energy (The Red Bull cans, 2014). In order to have the maintenance of its supply chain practices, Red Bull has been implementing several effective techniques and using its available resource in an optimum way.

Red Bull has been significantly managing its market share in the UK and trying to maintain its sales to a good level in the recent decade. Despite this, the stiff competition posed by other energy drink companies and the decline in the market share, and the impact of the production process on the immediate green environment are the key strategic issues that company has been facing on regular basis to a certain extent. Both in the US market and the UK market,
the energy drink markets have been growing up at a rapid pace and thus it is a challenging situation for Red Bull to maintain its leadership position in the long run. In this way, this case study of Red Bull represents that Red Bull which is a leading business organization in the production of the energy drink products has to maintain its strategic leading position in the international market with adequate approaches to deal with the competitive forces, shared market, and sustainable business practices. 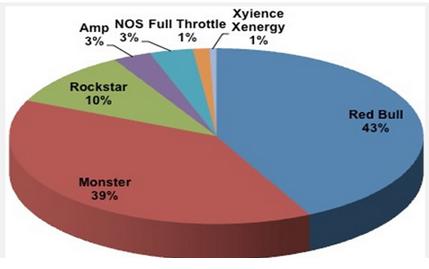 Maintenance of the Sustainable Business Environment: From the case study, it is clear that minimizing the impact of the production process of Red Bull on the immediate green environment is a critical issue for the company as it has to make significant efforts to reduce carbon emission and minimizing carbon footprints of its production process.
From case analysis three key questions are developed for these three issues as under:
Question 1: How critical is the challenge of competitive force faced by Red Bull in the global energy drink industry?
Question 2: What measures should Red Bull undertake to secure its market from companies sharing its market share to a significant level?
Question 3: How essential is it for Red Bull to maintain sustainable and socially responsible production processes?

The presented case of Red bull has revealed some of the critical strategic issues faced by the company. These strategic issues can be analyzed with the application of three different strategic models and framework as below:
SWOT Analysis: The issue related to the company’s inability to counter the intense competition can be reflected with the help of the SWOT Framework. The SWOT framework for the company can be applied as below:
1. Strength:
Red Bull has been maintaining a strong brand image in the global market place and has been attaining a competitive advantage over other key players. The Brand Image and promotional strategies of the company have given it recognition as a synonym of energy drink product (The powerful sales strategy behind red bull 2014).
2. Weakness:
The product portfolio of the company is weaker as compared to other soft drink companies as Red Bull holds a limited range of products. The competitors of the company are offering varied products with a distinct flavor. The products of the company contain Caffeine and Taurin which are quite vulnerable to industry regulations. The company does not have sufficient patents of its products (Giving wings to people and ideas 2014)
3. Opportunities:
The new emerging markets at the global level are facilitating Red Bull with newer opportunities to establish new production facilities. The company has sponsorship in the new market of the US and the UK. Red Bull has established its manufacturing units in the Asian subcontinent, which is a huge business opportunity for the company to expand its business (The powerful sales strategy behind red bull 2014).
Threat:

the company has been facing various constrain in different geographical markets. The market position of Monster in the UK market is a great threat to securing its market share by Red Bull. The promotional activities of the company are as effective in mature markets like the UK. Increasing health concerns among customers and huge price competition in the market are also some major threatening factors in the market for the company (The Red Bull cans. 2014).

This model has been applied to evaluate the competitive position of Red Bull in the Emery Drink Industry. This analysis can be done as below:
1. The threat of New Entrants:
The threat of new entrants in the global energy drink industry is quite high as this industry is quite lucrative for new business investors (Henry, 2011). However, the well-established position of Red Bull has this threat only to a certain level as it holds a leading market position in the industry ((Boone and Kurtz, 2014).
2. Threat of Substitutes
There is a high threat of substitute beverage and drink products in the external business environment of the soft drink industry. The existence of these substitute products can harm the market growth of Red Bull’s energy drink products. The company needs to offer a wider range of energy drink products to win competitive advantages over these products.
3. Bargaining Power of Buyers
The customers in the energy drink industry have their specific requirements from the products they consume regularly. The brand image of the energy drink products is a key factor that induces the customer to switch over other products and there are already several options of beverage products for the customers, and hence the bargaining power of customers in the industry is quite high (Boone and Kurtz, 2014).

Do Assignment On Time

For the purpose of analyzing the company’s strategic orientation in the new and existing market place, there is a need of having a thorough analysis of the related market place. In this regard, the PESTLE framework can be considered quite crucial. This framework reflects some crucial factors related to the external marketing environment. Some of the crucial external marketing environment can be elaborated as below:
1. Political factor:
Political Factors of the country direct impact on the business position of the companies operating in that country. In this regard, the political stability of major economies including the US and the UK has a direct impact on Red Bull’s business. Food and Beverage regulations are very strict in the UK and even customers in the UK are quite aware of their health aspects. The Use of Caffeine has also been banned as an ingredient in the production of energy drinks products by the UK government. The government of the UK has been controlling sales of energy drinks through monitoring the use of harmful ingredients in the product of energy drinks ((Henry, 2011). Thus, Political conditions are very essential to be followed by the company to maintain its sustainable business position.

2. Economic environment:
The global Soft drink industry has a significant contribution to Energy drink companies in the economic growth of the related country. In the year 2009-2010, the growth of the UK’s economy was 7%, which help Red Bull to earn a profit amount of US$ 30 Billion. The company has also held a leading market position with its sales growth in the UK market in the year 2012 when the company earned £ 2145.46 Billon (The powerful sales strategy behind the red bull, 2014). In this way, the economic conditions of an international market are very important for the company to maintain its sustainable position in the global Energy drink Industry.
3. Social Environment:
There are some critical social factors that can be considered quite vital for the company. In the context of Red Bull, it can be considered that nowadays, people have become quite attentive towards their health and social prestige. Energy drink products have positive and high social values. The products offered by the company are considered a symbol of social prestige and status symbol (The powerful sales strategy behind the red bull, 2014). In this regard, the positive social perspective of the people regarding soft and energy products has created a positive and opportunistic business environment for Red Bull in the long run. However, the increasing concern of people on the health and related aspects also enhances the pressure over the company to make changes in its product offerings (Henry, 2011).

4. Technological factors:
In order to attain a sustainable position, all the companies in the energy drink industry have been adopting new and advanced technologies. In order to improve its production process, Red Bull also needs to implement highly advanced technologies to survive in the changing competitive business environment. the company makes use of ‘Wall to Wall’ production technology for developing and manufacturing of freeze bottle (Wall-to-Wall production, 2014).
5. Legal factors:
There are some critical legal implications that have made the beverage and energy drink industry more regulated in the existing time period. Within the country, there are certain legal and ethical guidelines for the purpose of ensuring a healthy composition of energy drink products. The legal authorities of the county have directly banned some crucial ingredients such as Caffeine and Taurin (Dietrich Mateschitz, 2014). In addition to this, from the perspective of environment safety also there are several laws and legal guidelines that affect the company’s manufacturing, packaging, and distribution process in the most effective manner.

6. Environmental Factors:
Along with other external business environmental factors, environmental concern among people can also be counted as one of the critical business factor that can affect the operations of the company in the most effective manner. Growing concern towards environmental safety among people has induced the company to adopt a green production process. In the packaging of the product also some crucial changes in the company’s operational process can be seen. For instance, the company has started to use recyclable can and packaging material for making the product more environmentally friendly (The Company behind the can. 2014).
Positing Map:
In order to reveal the strategic position of the company in the market place in terms of the product’s perceived quality and price range, the Position Map framework can be used in the most explicit manner ((The Company behind the can. 2014). As per this framework, there is a need of exploring the position of competitors in the market and measure the relative position of the organization in the existing market. The specific position map for Red Bull in the market can be presented as below: 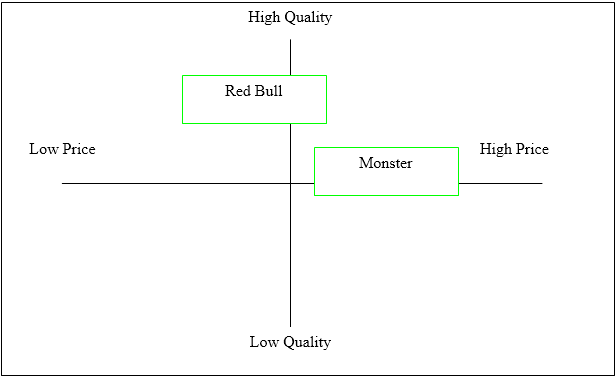 In this way, on the basis of the analysis of different strategic models in the section, it can be cleared that for the company it is essential to the company to address some of the strategic threats that can harm the overall sustainability of the company in existing highly competitive marketplace.