The employees of the business working willingly in the organisation with a purpose of making the business successful are like team members. Millions of companies work in the complex environments and these companies gain solutions to complex tasks with the help of teams. Team work engages different groups of people who get together to maximize their efficiency to reach a common goal (Dyer, Dyer,and Dyer, 2013).A team can be formed or organised in many ways.

It can be formed upon a particular product being developed, it can be formed upon the research work done in a specific area and it can be formed on the work experience of the members in the business etc (Maxwell, 2009).The objectives of the businesses to make people work in teams include innovation, financial savings, increased efficiency and morale etc.
Businesses and companies have experienced many benefits from employees working in teams and this is the reason why they take a great interest in dealing with team issues and concerns so as to improve the team environment (Maxwell, 2009). The inclination of the firms on the interaction amongst employees in a team and their problem solving has considerably increased. Firms focus and support teamwork so that they can bring people together so that the members feel and gain more authority and ownership over the processes.

The members work and deal in a team fast than working in isolation. With the help of teamwork, it is possible for the business to attain flexibility in its operations (Dyer, Dyer, and Dyer, 2013). The bottlenecks and problems are easily surfaced when different people are together working in a team.
In this context, the following report is focused to identify the purpose of teamwork and outline the benefit and limitations of teamwork in business. The report will explore the concept and functioning of team as well as the skills required to develop the teams in a business.

Conceptualisation of team work in business

According to West (2012), team is basically a group of people who work in an aligned manner to accomplish the task. A team is considered to be effective when it has members who are clear with the aims and objectives and is of the right size. In this concern, team reflexivity may be defined as the process of reviewing the aims and objectives of a team and assessing them in context to the fulfilment of the tasks. For a team to be effective, it is essential that a team should be creative, flexible and adaptable according to the changes in the business environment. It is essential that the members should value perspective, knowledge and skills of other members to accomplish the task effectively (West, 2012). 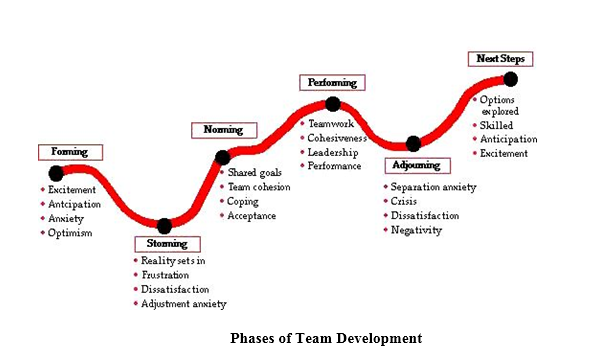 Source: https://www.nationalserviceresources.gov/stages-group-development-americorps-and-other-national-service-programs
Hellriegel and Slocum (2010) have stated that a team is formed with the help of a process, which progresses from one stage to another. The stages of team development include forming, storming, norming, performing and adjourning stage. Forming a stage includes the process of clearly describing aims and objectives. Storming stage is the second stage, which includes the development of a conflict and assigning the task priority for the accomplishment of goals. This is followed by the norming stage, which includes information sharing related to the task, and rules are framed for tasks’ accomplishment. In the performing stage, each member accomplishes the task with the help of diversity in viewpoints. This is followed by the termination of the team formed for task accomplishment, and this is called as adjourning stage (Hellriegel and Slocum, 2010).

Benefits of team work in Business

As per the views of Butterfield (2010), working in a team helps a business organisation to accomplish the aims and objectives in an effective manner. With the help of an effective team, workload is balanced and this helps in reducing stress, related to work, effectively. This helps in developing a sense of responsibility and also increases the feeling of identity and self-esteem. Along with this, teamwork also helps in creating a network of support as there are huge chances of conflicts in regard to goals. This can be sorted with the help of other members and develops a support network by solving conflicts (Butterfield, 2010).
Along with this, Bovee and Thill (2013) have stated that teamwork in an effective manner helps in increasing productivity, involvement of employees, creativity and develops the decision-making ability. With the help of an effective team, information and knowledge can be shared in a better way among members and a better decision can be taken with the help of information shared. A team is a group of employees who have different perspectives and, due to a shared goal, various views about the goals can be presented, and this increases the acceptance of different solution to the shared goal. Along with this, an effective team helps in increasing the level of performance of employees and organisation (Bovee and Thill, 2013).
Means (2009) has also stated that effective working in a team helps in developing learning abilities among the members to work in a team, and this is considered as the most challenging task. In this concern, a number of rules and regulations are implemented to handle various critical issues and help in understanding better ways to make effective decision (Means, 2009).

Limitations of teamwork in business

Along with the above stated advantages of an effective team, there are a number of disadvantages and limitations associated with teamwork. In the views of Pride, Hughes and Kapoor (2013), it has been given that teamwork has reduced the turnover rate and productivity has increased, but the formation of team is considered as a challenging and complex task. Team formation consumes time, and there is no conformity that after the formation of the team, it will work in an effective and successful manner. In case a company is not able to resolve any conflict and the team lacks cohesiveness, then it will lead to a decline in the productivity and profitability of organisation will be affected (Pride, Hughes and Kapoor, 2013).
Williams (2011) has also stated that the social loafing is also considered as a major disadvantage of teamwork as there are some workers who are not able to work effectively and cannot share their work effectively; this results in a high turnover. Moreover, the problem is faced at the time of good decision-making as due to a difference in the perception, an effective and common decision can not be made easily. Meetings held to take proper decision in the absence of a better decision affect productivity and include wastage of time (Williams, 2011).

Recommendations to capitalize benefit of teamwork

It is considerably important that the individual who is forming a team evaluates the team goals, expectations and requirements. If this is not done systematically there is a chance that the team members do not understand the aim of making them work in a team (Parker, 2005). The requirements and expectations can be of any sort for e.g. increasing the sales, to decrease the staff turnover and making the internal processes easier etc.

The communication with the team members as a group or as individuals is necessary. It is the employees or the work force that is responsible for achieving the objective and the targets (Maxwell, 2009).If there is no sincere communication then the firm may later notice the workforce facing work related issues, concerns related to jobs and roles and their ambitions might be clashing with the firm’s aims and objectives.
The firm needs to identify the challenges that the employees of the team are facing in terms of product knowledge, office politics, work environment and personal problems (Dyer, Dyer, and Dyer, 2013). Proper actions, omissions, counseling sessions, training meetings and seminars are the ways in which a team can be developed.
Installation of a system to ensure fair suggestions/ comments for staff members is also an efficient way of building teamwork in an organization. It is important that individual suggestions are taken and implemented (Parker, 2005). This can be done with the help of conducting surveys, interviews, or keeping a suggestion box in the work place. It enables openness and flexibility in the system.
Most of the methods employed in better development of teams do not work because there is no follow up action (Maxwell, 2009). Monitoring and follow up needs to be done by a responsible person who updates the management of the issues of team members and also keep the team members updated with the management happenings.