The Middle Ages is known as the Medieval period in World history. This period spans between 5th and 15th century AD and it came just after the fall of the Roman Empire. During this period, many people have returned to the occupation of general agriculture and most of the societies were urbanized and modern. The field of Arts, Architecture, Philosophy, Mathematics, and Poetry was rapidly developing with the help of great men like Fibonacci, Oresme, Giotto, Chaucer and Dante. Each of them is famous for their respective work in various fields. During this period, there was a lot of development in the field of education in middle age. Moreover, the Universities have taken birth during this time. Moreover, the modern tradition of wearing caps and gowns of the present times were actually originated during the middle ages. 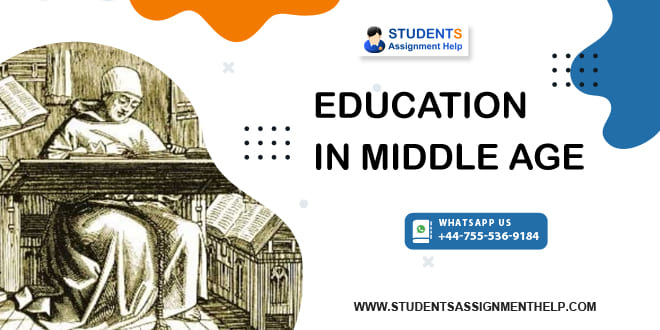 Propagation of Education in the Middle Ages

The mode of imparting education during the Middle Ages was generally done by the Churches. A large number of Cathedrals imparts education among young boys. They were provided free education in the usual educational institutions. But when it comes to educating the girls, they were taught only basic reading and writing at home only. Some of the most popular subjects taught to the students are Liberal Arts, Latin, Grammar, Logic, Rhetoric, Astronomy, Philosophy, and Mathematics. If you compare the education system of the middle ages with that of the darker ages, students were taught practical experiences of hunters, poachers, wildlife, livestock, and agriculture from the farmers. Monks, priests, and bishops of all religions took up the task of teaching and imparting education and its pattern was mainly religious.

Accessories of Education in the Middle ages

During that time, there were no modern pen and papers to write as seen in today’s education system. Students and Scholars used a bone or ivory for writing their notes on tablets made up of wood. These tablets were coated with green and black wax. The teachers and propagators of education have first written books through their own hands. In those times, parchments were used as papers. These parchments were made up of animal hides which were dried before making the parchments. Moreover, a special type of ink was used to write, these inks perfectly set on the parchments which was made from animal hides. During those times, Quill pens were used to write and this is generally made up of bird’s feathers. These handmade pens were perfectly manufactured and are regarded to be one of the best inventions during that period of time.

Do you have a request for “Write my assignment”? Then our experts will take forward your request and complete your assignments perfectly.

Introduction of new subjects, ideas, and invention in the field of Education during middle ages

The education system in the Middle Ages led to the introduction of Algebra and Decimal Number System. During this time, there was also the introduction of Classic Poetry and translation of books from other cultures of the world. This led to the people’s quest to get more knowledge, and more and more people from all stages of life wanted to get themselves educated. Education was so much popular in the Middle Ages that some of the world’s best invention was made in this phase. Here, mostly the Muslim Scholars and Educators carried out research to invent machines and tools such as the compass, water clock, gunpowder, and also special type of cloth material. The invention of sea navigation tools was mostly invented by the Arabs. Moreover, a large number of medical books and trade books also came into existence during that period of time.

The true nature of the education system in the Middle Ages

During the Middle Ages, Bishops, Monks, and Priests were the main educators. They prefer to educate the upper-class students while the lower class students were rarely educated. This was because the entire society was based upon the feudal system of society. Most of the lower class people and peasant work for the upper-class people for their living, They even engage their young children at work and this proves that at middle ages education was also meant for the upper-class students and the children belonging to the peasant class were unable to reap the benefits of education.
Moreover, during that period, it is advantageous to have education only for the ruling class, since they were able to rule over the lower class people. The educational institutions kept the poor class people away from having education so that they get subdued by the ruling class people. Moreover, the tuition fees charged for education were very high and it was impossible for the poor class people to even afford it.  As a whole, the education system of the Middle Ages was meant to keep the poor class people uneducated and poorer.
Educating people during the middle ages was quite a tough task because during the time of wars and battles, the classes were disturbed in monasteries, churches and thus studies were stopped during a particular period of time.

Most of the students opt for higher education and obtain degrees. But very less number of students aims to get degrees while the maximum numbers of students who belong to the ruling class and peasant class either get themselves to learn to fight and work as a peasant.
Do you want to get the assignment writing services at a cheap price? Our experts can help you deliver the best assignment works at an affordable price which is well suited to your budget.

Write My Assignment at Cheap

Women Education in the Middle Ages

The feudal system during the middle ages lays emphasis on men authority over the womenfolk. Women have little or no chance at all to attain education. The young girls from the upper class and ruling class were taught the basics of reading and writing at home only. When upper-class girls were limitedly taught, it is unfeasible for the girl and woman from a peasant background to learn how to read and write. The education imparted to the upper-class women is very limited and it is controlled by the authority of Church.

During the middle ages, women were not encouraged to get better education since they were seen to have the lower strata then that of the men folk. In Medieval history, women were given a position lower than the men in society. Whatever education women got was just to be a good householder and was given the training to be a good wife and good mother in the future.
Thus, this was the position of education at that time. But due to the modern thoughts, education was open to all strata of life in modern times.
Do you want to employ the best writers to provide essay writing help? The essay writers at StudentsAssignmentHelp.Com are the best and reliable one to get the ultimate homework help.