Is Football Too Dangerous for High School Essay

Football is a major game which is played worldwide, but sometimes serious injuries to the children could be the consequence of this game. People often get injured and sometimes their legs get broken while playing this game. Essay on is football too dangerous sport for students are assigned to the students by their professors and teachers.

For example, argumentative essay on the topics like is football too dangerous for high school and other such essays are assigned to the students. 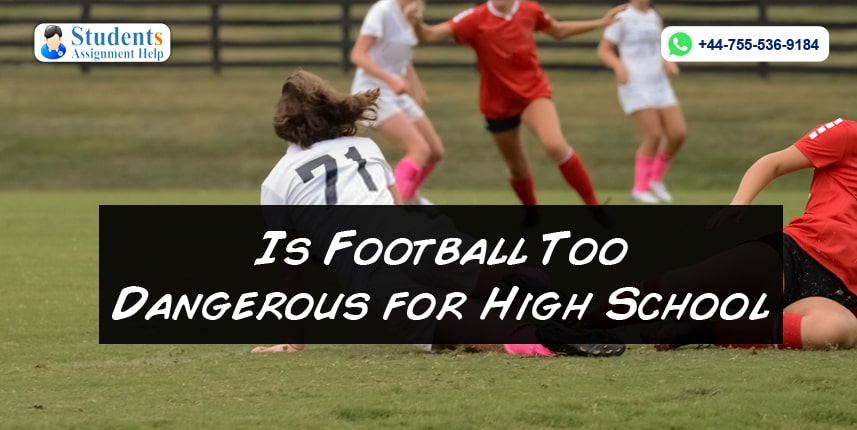 It is not necessary that every student from high school get injured while playing football and we cannot stop playing due to the fear of injuries as they can happen in any type of game not just in football only.

From the past few couples of decades, football popularity has immensely increased because of its reorganization worldwide. Various national and international tournaments give a platform to the best player of the world to show their capabilities through this game and also offer a chance to earn heavy chunks of money as well. But some people are still running in the conventional mindsets that children who are lower in an age like high school students must not be drained to this pursuit at any cost.

The reasons which are given behind this are the injuries that could probably happen to the children and children might get serious fractures at an early age. Here we are going to challenge these conventional ideologies by giving certain examples in the essay. Have a look at the following essay to know more about the issue of not playing football in high school days.

Here are certain justifications that are going to object the conventional thinking of the people who believe in the ideology that little children must not be subjected to sports activities like Football. Each and every issue related to the early beginning of playing football is addressed completely in this essay.

Why we should not Consider Injuries in Sports

Almost every game, be that football or basketball is associated with the risk of injuries to the different part of the human body. If we will start thinking in such a way that not playing sports for the risk of injuries then nobody will be able to play football at any age. Even adult will also refrain from playing football because of the risk of breaking their legs.

Sports will disappear from the diaries of sportsmen. Thus we cannot say that high school children should be stopped from playing football. Let them play and explore the game, even parents are plunging their children in the sports from the very childhood so that they can gain expertise and knowledge which will keep them fit and gain much more success in the sports.

Early years of life are very important to give proper orientation to the kids to make them active in the sports. Also at this point in time, the body of the children could be made flexible for the purpose of sports which is not possible in the latter part of life. If children were not being given the freedom to play in their early stage of life it will be very difficult for them to manage the flexibility in their bones. A good habit through the rules of the game is also inculcated in the children if they start playing football and such other games from early childhood. So parents who are not sending their wards just for the cause of injuries should understand it and allow their children to play in the sports track.

From the entire essay, we can draw a conclusion that football is important for the health of the human body as games are the main sources which can keep us fit around the way. More good habits through the rules of games like sharing, not to cheating and team strengths can be inculcated in the children by their trainers. Also, we cannot ignore the significance of games in making a good career in this area high popularity to the sportsmen along with big chunks of money make their life stable and full of enjoyment. Those who refrain to allow their children in getting on to the sports courts and tract should understand this principle clearly and must allow their children to play. We can bring a major improvement in the ideologies of the people through sports in this way.

So if you have been assigned with the assignment of writing the essay on the topic is football is dangerous for high school help could be taken to write such essays. Students Assignment Help Experts are giving round the clock help in writing an essay on football. Also, students can understand the importance of format and introduction and conclusion writing as well through this sample essay.